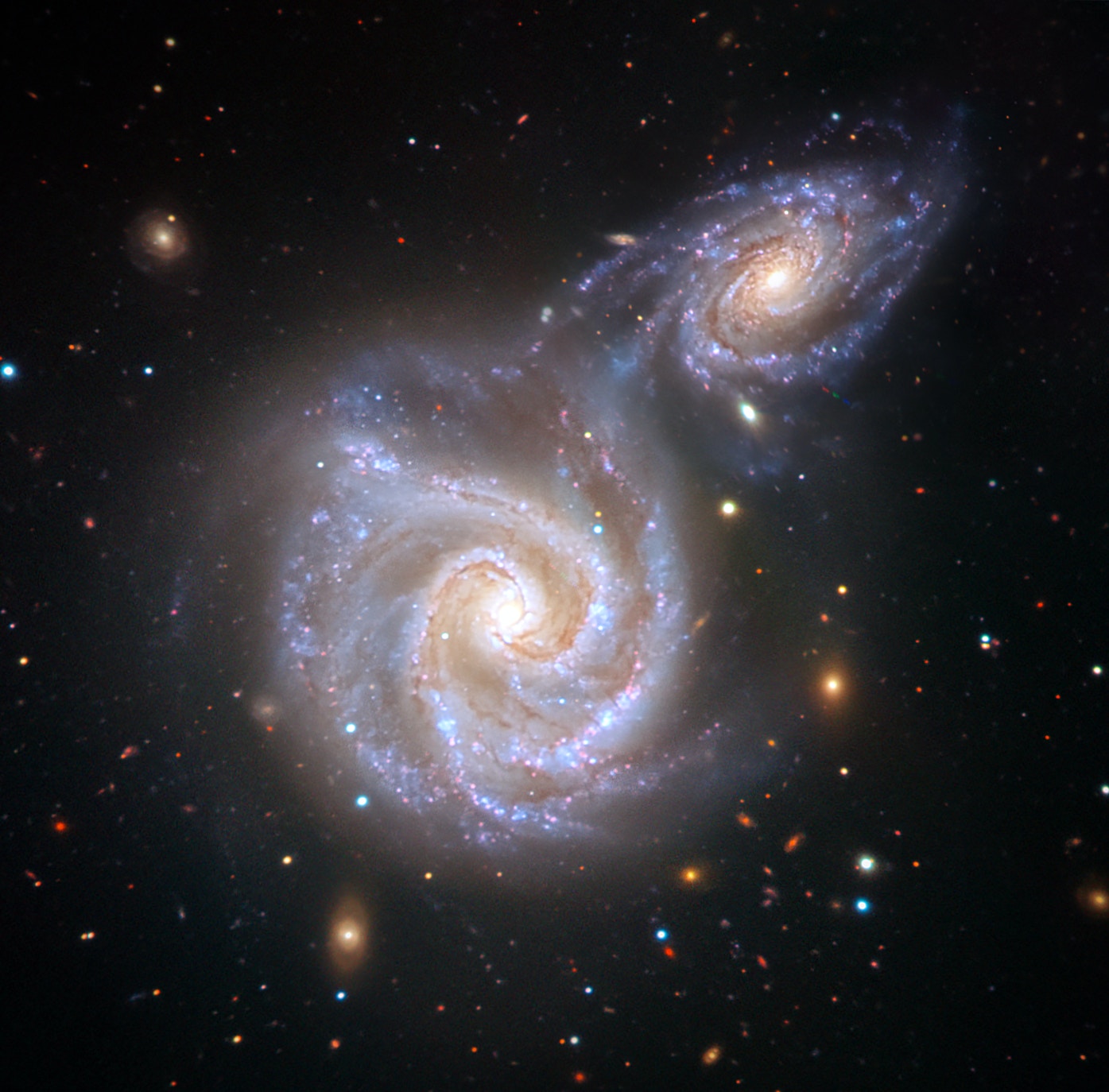 The Gaia Sausage: The Major Collision That Changed the Milky Way Galaxy on Simons Foundation

An international team of astronomers has discovered an ancient and dramatic head-on collision between the Milky Way and a smaller object, dubbed the “Sausage” galaxy. The cosmic crash was a defining event in the early history of the Milky Way and reshaped the structure of our galaxy, fashioning both its inner bulge and its outer halo, the astronomers report in a series of new papers.

The astronomers propose that around 8 billion to 10 billion years ago, an unknown dwarf galaxy smashed into our own Milky Way. The dwarf did not survive the impact: It quickly fell apart, and the wreckage is now all around us.

“The collision ripped the dwarf to shreds, leaving its stars moving in very radial orbits” that are long and narrow like needles, said Vasily Belokurov of the University of Cambridge and the Center for Computational Astrophysics at the Flatiron Institute in New York City. The stars’ paths take them “very close to the center of our galaxy. This is a telltale sign that the dwarf galaxy came in on a really eccentric orbit and its fate was sealed.”

The new papers in the Monthly Notices of the Royal Astronomical Society, The Astrophysical Journal Letters and arXiv.org outline the salient features of this extraordinary event. Several of the papers were led by Cambridge graduate student GyuChul Myeong. He and colleagues used data from the European Space Agency’s Gaia satellite. This spacecraft has been mapping the stellar content of our galaxy, recording the journeys of stars as they travel through the Milky Way. Thanks to Gaia, astronomers now know the positions and trajectories of our celestial neighbors with unprecedented accuracy.

The paths of the stars from the galactic merger earned them the moniker “the Gaia Sausage,” explained Wyn Evans of Cambridge. “We plotted the velocities of the stars, and the sausage shape just jumped out at us. As the smaller galaxy broke up, its stars were thrown onto very radial orbits. These Sausage stars are what’s left of the last major merger of the Milky Way.”

The Milky Way continues to collide with other galaxies, such as the puny Sagittarius dwarf galaxy. However, the Sausage galaxy was much more massive. Its total mass in gas, stars and dark matter was more than 10 billion times the mass of our sun. When the Sausage crashed into the young Milky Way, its piercing trajectory caused a lot of mayhem. The Milky Way’s disk was probably puffed up or even fractured following the impact and would have needed to regrow. And Sausage debris was scattered all around the inner parts of the Milky Way, creating the ‘bulge’ at the galaxy’s center and the surrounding ‘stellar halo.’

Numerical simulations of the galactic mashup can reproduce these features, said Denis Erkal of the University of Surrey. In simulations run by Erkal and colleagues, stars from the Sausage galaxy enter stretched-out orbits. The orbits are further elongated by the growing Milky Way disk, which swells and becomes thicker following the collision.

Evidence of this galactic remodeling is seen in the paths of stars inherited from the dwarf galaxy, said Alis Deason of Durham University. “The Sausage stars are all turning around at about the same distance from the center of the galaxy.” These U-turns cause the density in the Milky Way’s stellar halo to decrease dramatically where the stars flip directions. This discovery was especially pleasing for Deason, who predicted this orbital pileup almost five years ago. The new work explains how the stars fell into such narrow orbits in the first place.

“While there have been many dwarf satellites falling onto the Milky Way over its life, this was the largest of them all,” said Sergey Koposov of Carnegie Mellon University, who has studied the kinematics of the Sausage stars and globular clusters in detail.

Scientists spot flash of light from colliding black holes. But how?