Are Fast Radio Bursts (FRB) an answer to Dark Matter? 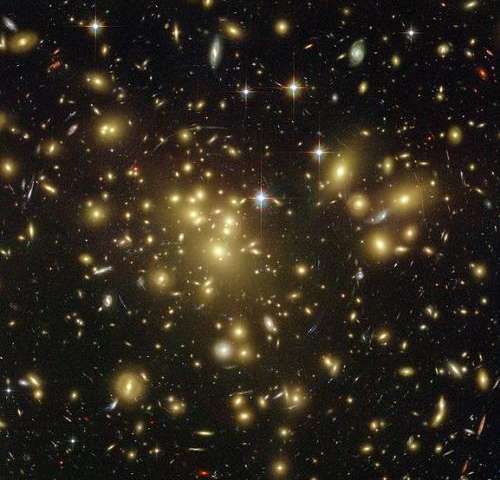 ​A massive cluster of yellowish galaxies, seemingly caught in a red and blue spider web of eerily distorted background galaxies, makes for a spellbinding picture from the new Advanced Camera for Surveys aboard NASA’s Hubble Space Telescope. To make this unprecedented image of the cosmos, Hubble peered straight through the center of one of the most massive galaxy clusters known, called Abell 1689. The gravity of the cluster’s trillion stars — plus dark matter — acts as a 2-million-light-year-wide lens in space. This gravitational lens bends and magnifies the light of the galaxies located far behind it. Some of the faintest objects in the picture are probably over 13 billion light-years away (redshift value 6). Strong gravitational lensing as observed by the Hubble Space Telescope in Abell 1689 indicates the presence of dark matter. Credit: NASA, N. Benitez (JHU), T. Broadhurst (Racah Institute of Physics/The Hebrew University), H. Ford (JHU), M. Clampin (STScI),G. Hartig (STScI), G. Illingworth (UCO/Lick Observatory), the ACS Science Team and ESA

Signal detected from the first stars in the universe, with a hint that dark matter was involved